This plugin includes your Google Analytics tracking code on your pages and posts.

I just released a major update for my SQL Reports plugin. The new version, 3.06.14, has a lot of exciting new features like automatic scheduled backups of your database, and the ability to save archives of your DB and have them emailed to you. You can also retore these backups directly into your native WP DB or to an external database. The plugin uses the WordPress CRON API to schedule hourly and/or daily DB backups.

I also added a quick and easy shortcode for displaying a single variable from an SQL query. Just wrap your SQL query in the sqlgetvar short code like this:
This SQL Query has not been allowed by an Administrator.

Have fun with these new features and let me know if you have any ideas or suggestions for improvements.

I added a shortcode to my SQL Reports Plugin so you can put a report you’ve created into a Page or Post. Just use the shortcode “SQLREPORT” with the attribute “name” being the name or your desired report. Like this:
[SQLREPORT name="My Report" style="border: 2px solid #CCCCCC; padding: 6px;" /]

The below example is a Report that I make to see the effect that Google’s SSL Search has been having on my Keyword Data. I broke it down by Locale so that I could see the differences between the use of google.com as compared to the other country codes.

I just created a small Widget for the SHH Blog that runs a simple query to find posts posted around the same time last year.

I just released my new Anti-Malware plugin for WordPress. It is still in BETA but I think it will be very helpful in removing malicious scripts and patching security vulnerabilities. 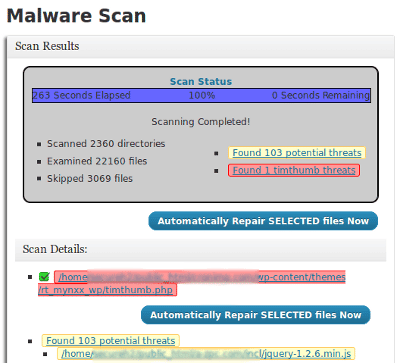 An example scan that found some threats

After a lot of reports of an intermittent issue with the Related Posts sometimes not showing up I have finally found and fixed the bug that caused it. Please download this new version 1.2.03.04 which also includes Post dates and Excerpt support. These patches and new features seem to have spawned a new wave of interest as I now have over 10,000 downloads! The odd thing about these stats is that it seems to show over 600 downloads since I uploaded version 1.2.03, which is about 6% of all downloads, yet the latest versions represented in the pie chat above are 1.2.02 and below. Anyone have any idea when and how these stats are compiled? Please comment.

I haven’t posted anything this whole month because one of my servers got hacked and I’ve spent the last three week working on a new plugin to scan and remove malicious software from my server.

It wasn’t enough for me to just remove the hack. I had to make sure it wouldn’t come back and because it was such a widespread exploit I thought it would be good to release a plugin for other website admins to check their site for themselves.

I looks like my infestation of nasty scripts came in through a vulnerability in an older version of timthumb.php. Apparently any version older that 2.0 can be used to place a file on the server. If that file is a back-door of some kind then the person who put it there could have full access to your server.

Download my latest version (1.2.01.18) and you can customize the placement of the Menu Item. Plus, I’ve made the Tag and Category headings in the Tree View widget link to that Tag or Category. With over 4,000 downloads I’m finally starting to get some good feedback too. Keep it coming!

I added “Tree View” to the Widget options with the ability to show the Widget on pages with multiple Posts. This new option displays links to related post under a subheading for the Tag or Category that it is related by. It also features a multi layered loop that dynamically removed duplicate Post Links and auto balances the remaining link so the Widget shows a relatively equal amount of Post Links under each Tag or Category. So, download version 1.2.01.04 and use the Widget on pages that have multiple Posts.

I embeded these YouTube Videos using Artiss YouTube Embed By David Artiss. It was a great Plugin for WordPress YouTube videos but it was taken over by another developer and it’s not as well liked any more. Besides which, with the new version of WordPress you can now embed YouTube videos automatically just by pasting the shortlink into a Page or Post.