After a lot of reports of an intermittent issue with the Related Posts sometimes not showing up I have finally found and fixed the bug that caused it. Please download this new version 1.2.03.04 which also includes Post dates and Excerpt support. These patches and new features seem to have spawned a new wave of interest as I now have over 10,000 downloads! 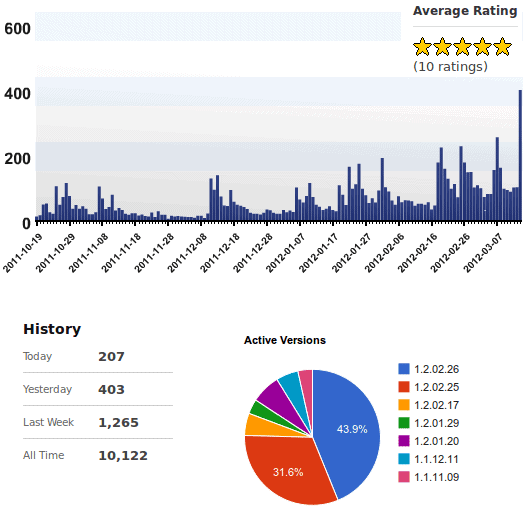 The odd thing about these stats is that it seems to show over 600 downloads since I uploaded version 1.2.03, which is about 6% of all downloads, yet the latest versions represented in the pie chat above are 1.2.02 and below. Anyone have any idea when and how these stats are compiled? Please comment.

Download my latest version (1.2.01.18) and you can customize the placement of the Menu Item. Plus, I’ve made the Tag and Category headings in the Tree View widget link to that Tag or Category. With over 4,000 downloads I’m finally starting to get some good feedback too. Keep it coming!

I added “Tree View” to the Widget options with the ability to show the Widget on pages with multiple Posts. This new option displays links to related post under a subheading for the Tag or Category that it is related by. It also features a multi layered loop that dynamically removed duplicate Post Links and auto balances the remaining link so the Widget shows a relatively equal amount of Post Links under each Tag or Category. So, download version 1.2.01.04 and use the Widget on pages that have multiple Posts.

Now you can include Related Post Links at the bottom of every post. Just go to the new Setting page in your WordPress Admin after upgrading to the new version of Eli’s Related Posts Plugin. I also created a Screenshot of the plugin “in action” as suggested by WordPress user

Well, my Related Posts Widget has been on the WordPress Repository for exactly one month. I have had over 1,400 downloads and absolutely no feedback (other that what I have actively solicited from friends). So, leave a comment, question, or a request for enhancements or feature here.

I added a menu to the WordPress Admin with a few helpful link for those users that don’t take the time to read instructions before installing and then hunt around for a way to use what they just installed (Anthony). I am now using some new CSS tricks that I just learned from a friend (Anthony again) the other day to style the admin pages for my next release.

I got over 100 downloads just yesterday and now have over 400! It seems like I get a  lot more downloads when ever I release an update, as though everyone who has already downloaded it is then downloading the update. I think I’ll release this last update (1.1.10.28) and then take a break for a little while.

By request I have added the option of relating post by Categories as an alternative to Tags. And I changed the name again. The plugin is now called “A Related Posts Widget – ELI”. I stuck my name in there at the end so that people who know me and want my plugin would have a way to tell the one I wrote from all the others. I also added a screenshot to the plugin download page via the readme file.

A friend of mine installed this plugin yesterday and found that there was a conflict with some PHP code in another widget he already had installed. After taking a look at the other code I noticed that the function query_posts changes what posts I would expect to see returned by the have_posts function. So I added the wp_reset_query function to the start of my code so that my widget wouldn’t gab the wrong posts. Then I added it again at the end so I wouldn’t trip up any other plugin developers in the same way.

We got a record 51 download yesterday alone and now have over 100 in all, which is surprising for me since it’s only been available for three days and I have not even promoted it.

I’m thinking of changing the name again and dropping the whole acronym thing all-together (nobody seems to like it). But I still want the plugin name to stand out in some way. Any feedback would be appreciated and don’t forget to rate my plugin on the WordPress Plugins Page

I got the plugin into the WordPress repository yesterday and I’ve already made lots of changes to it. First, I changed the name to POSTALLORBUST which stands for “Posts On Sidebar That Are Listed and Linked Organically Related By Using Same Tags”. Then I made the widget into a PHP Class and added some basic options to it. I had already had 26 downloads after only one day so I thought I should make this plugin a bit more useful. Unfortunately changing the name of the plugin does not change the name of the repository directory or the directory it installs into. Anyway, you can now download this plugin directly from within the WordPress admin (it you can find it) and receive update as they come out.

Don’t forget to rate it in the WordPress Plugin Directory

So I made a new plugin for WordPress call SPOSTARBUST which stands for “Show Posts On Sidebar That Are Related By Using Same Tags”. That is basically what it does although I am using it on the Footer Area of this site because the Sidebar doesn’t show up at all on single posts or pages in the Twenty Eleven Theme, and I wrote the widget to only show itself if you are on a single post. Anyway, it’s a rough draft and I’m just going to try and submit it to WordPress as is and make updates to it later.